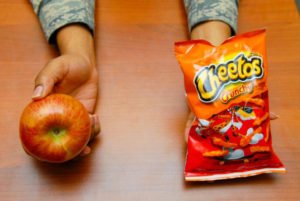 According to the internet, just about everything effects fertility. This nut hurts your fertility, this fruit boosts your fertility.  Give your reproductive system some credit. It’s yours and yours alone and it is much more complex than that. However, there is something to be said about what we eat and our general health and its affects on our reproductive system. Check out this guest post by Dr. Laurence Jacobs for some  good health = good reproduction advice.

Decreasing Your Consumption of Processed Foods

Everyone is busy these days, and our waistlines are suffering for it. The American diet relies heavily on processed foods, and this is not healthy and can decrease fertility.
A recent National Institutes of Health study found that eating processed foods may actually encourage people to overeat. The offending foods are not only the empty- calorie, starchy, high carbohydrate foods that are obviously processed, such as potato chips. Some foods that are considered ultra-processed, such as yogurt with added fruit, might surprise you.
The Study
NIH scientists looked at 10 healthy men and 10 healthy women who were of stable weight. They randomly assigned the study participants to one of two diets that were matched for calories, sugars, fiber, fat, and carbohydrates.
One group was fed an unprocessed diet, such as a lunch of spinach salad with chicken breast, apple slices, sunflower seeds and grapes. The other group received an ultra-processed diet, such as a lunch of Chef Boyardee beef ravioli, parmesan cheese, white bread, and diet lemonade. Participants could eat as much or as little as they wanted.
The researchers found that the people on the ultra-processed diet ate more carbs and fat. People on the ultra-processed diet also ate much faster, and ultimately they ate an average of 508 calories more per day and ended up gaining an average of 2 pounds over a two-week period. The people on the unprocessed diet lost about 2 pounds on average over the two-week period.
Processed Foods and Fertility
The NIH’s small, controlled study links the consumption of processed foods to weight gain, and we know that being an unhealthy weight can negatively affect fertility. Being overweight can cause hormonal imbalances and problems with ovulation, and obesity is also associated with  Polycystic Ovarian Syndrome, a common cause of infertility.
In addition, other studies have linked the consumption of processed foods to lengthening the time it takes to get pregnant. One study found that women who ate fast food, such as burgers, fried chicken, pizza and chips, four or more times a week became pregnant, on average, a month after women who never ate fast food.
What Is Considered Ultra-Processed Food?
The NIH study categorized foods by the NOVA classification system, which considers foods “ultra-processed” if they have ingredients predominantly found in industrial food manufacturing, such as hydrogenated oils, high-fructose corn syrup, flavoring agents, and emulsifiers.
These foods go through multiple processes, such as extrusion, molding, milling, etc. They are highly manipulated, and they may contain many added ingredients. Soft drinks, sweetened breakfast cereals, packaged soups, chicken nuggets, hotdogs, fries and more fall into this category. Other foods that can fall into this category include jarred sauces, frozen sausages, and other reconstituted meat products.
Weight loss of as little as 5 to 10 percent can increase your fertility and your overall health. Summer is a great time to change your eating habits and consume a healthy diet with minimal amounts of processed food. To eat more healthfully, read the food labels when grocery shopping. Buy only foods that have fewer ingredients, as well as ingredient names that you understand. Visit local farmers markets to choose fresh fruits and produce to increase your intake of important nutrients, and stick to shopping the sides of a grocery store. Avoid the middle aisles, which are generally filled with boxes and bags of unhealthy foods.